In One Trench: Parsing Iran’s Tech Agreement with the DPRK 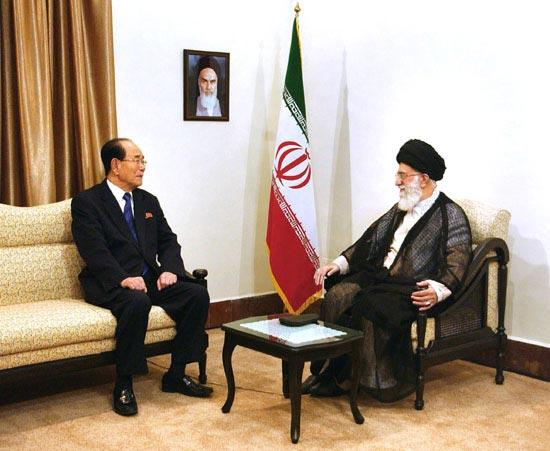 Given today’s ADHD-afflicted news cycle, issues sometimes get lost in the churn, but one issue continued returning to the temporal lobes with such frequency and duration, we thought it deserved another in-depth look to exorcize the demons.  Turns out this time the demons brought company.

Adam Cathcart deconstructed previous DPRK-Iran nuclear test tropes and also traced the implications and information fall out that North Korea tested nuclear weapons for Iran, but the DPRK-Iran Technology Sharing agreement, on the surface, seemed to be a more wholistic, sytemic approach and deserved a closer look.

Brian Gleason brings us a two part essay on the DPRK-Iran  Technology Sharing agreement signed at the Non Aligned Movement.  Part One of this essay explores the WHAT of the agreement; potential synergies between the DPRK-Iran in the areas specifically mentioned in the science/technology sharing MOU.  Part Two will examine the WHY; mutual threats – real or perceived – felt by Iran and the DPRK and how their science/technology sharing agreements might signal an effort to cooperate against these threats.  In so doing, there are some interesting sociological and fiduciary insights such as:  how do Islamic republics and avowedly atheistic regimes move past religious issues and since both sides are heavily sanctioned, how do they move money?  — Roger Cavazos, Coordinator

In “One Trench”: Iran and North Korea Prepare to Share Islamic/Juche Science and Technology

In August, Iran began its three-year leadership of the Non-Aligned Movement (NAM) by hosting the organization’s 2012 Summit, utilizing the NAM as a platform to counter what Iran perceives as efforts led mainly by Western powers to isolate countries opposing Western hegemony. As Iran welcomed North Korea, one of its most important anti-imperialist allies, Supreme Leader Ayatollah Khameini stated, “Iran and North Korea have common enemies since the arrogant powers cannot bear independent governments.”

Although the summit was apparently disappointing to Iranian leaders, who failed to garner widespread support among the attendees, the summit culminated with an important Memorandum of Understanding between Iran and North Korea regarding science and technology cooperation in research, student exchanges and joint laboratories. Moreover, joint projects will also include sharing information on IT, engineering, biotechnology, renewable energy, the environment, sustainable development of agriculture and food technology. Due to international sanctions, war clouds, pollution and environmental degradation, devalued currencies, the need to enhance existing technologies and the overall need to grow economically, the joint technology and science sharing agreement has more logic to it than meets the eye.

Biotechnology, Agriculture and Food Technology | The true nature of the proposed Iran-DPRK biotechnology cooperation is difficult to decipher. Iran has been accused of pursuing a biological weapons program in the past, but more recent assessments merely emphasize the dual-use possibilities inherent in its civilian biotechnology program. Moreover, North Korea and Iran both signed the Biological and Toxin Weapons Convention (BTWC), which prohibits the development, production, and stockpiling of biological and toxin weapons, although North Korea is suspected of maintaining a biological weapons program. Israel’s hostility toward Iran is another complicating factor.

Renewable Energy and Sustainable Development | Though it sounds counter-intuitive, Iran’s significant investments in renewable energy actually make a lot of sense considering the international sanctions targeting its oil exports, massive pollution in many parts of Iran, and the threats to its nuclear program. In February, Iranian Energy Minister Rostam Qasemi made a statement to the National Energy Conference in southern Iran, declaring that the “Gradual reduction of oil consumption on the one hand and a revolutionary and swift move toward using renewable energies on the other hand are the only appropriate mechanisms which can help the country.” In May, Iranian President Mahmoud Ahmadinejad allocated €500 million for renewable energy projects, including loans for small developers.

According to a report by the World Health Organization, Iranian cities are some of the world’s most polluted, with some cities registering air pollution 20 times over the recommended upper limit. Via Illume Magazine.

North Korea also has a slew of environmental problems, which it has only recently started to begrudgingly admit. In March, North Korea invited 14 scientists from eight countries to assess the state of the country’s environment and to offer solutions on improving environmental restoration and food security. Margaret Palmer, the executive director of the Socio-Environmental Synthesis Center at the University of Maryland, was one of three delegates sent from the US.

In an interview with the New York Times, Palmer offered her professional assessment of North Korea’s dual environmental and agricultural calamities:

One of the most obvious problems, though, is the massive deforestation that happened during the height of the ongoing famine, back in the 1990s. Pretty much everything was cut down for firewood or food — people resorted to eating bark. It’s a depressing landscape, especially this time of year. Everything is just mud and everything is being farmed, or attempted to be farmed. But their ability to produce food is being dramatically compromised by a cascade of effects caused by deforestation. There’s massive soil erosion, and the organic and mineral content of the soil has been dramatically reduced, as has the water-holding capacity of the soil, leading to drought conditions.

Thus, in addition to the potential improvements in food security stemming from Iran-DPRK biotechnology cooperation, the North Korean leadership has also shown increasing interest in the pursuit of sustainable development and renewable energy. During Kim Jong Il’s visit to Russia in August 2011, he briefly visited the Bureiskaya hydropower plant, and according to various sources KCNA reported that North Korea revised its environmental protection law in August to more fully promote the development and use of renewable energy sources.

The KCNA also reported that Kim Jong-il inspected a newly constructed facility in Pyongyang that uses an experimental water heater via solar heat. According to the report  Kim said, “This will resolve our heating problems, and the people will be able to use hot water year-round.” Clearly the need for renewable energy is being pursued in the DPRK for more than just external propaganda purposes, or, as Dr. Benjamin Habib has shown, in a quest for traction in the emerging market for international carbon credits.

In 2012, North Korean officials have continued to make public statements regarding the importance of renewable energy. On July 24, Vice-Marshal Choe Ryong-hae visited the Academy of Agricultural Science and “discussed the ways for increasing the utility rate of methane producing facilities and the problems arising in tapping renewable energy resources.”

Conclusion | Iran and North Korea have considerable room for cooperation in biotechnology, agriculture, food production, renewable energy and sustainable development. Although neither country has released any details regarding their potential agreement, the areas of cooperation mentioned in the memorandum of understanding seem to have some legitimacy in civilian programs that extend beyond military applications or defense considerations. However, as with the case of dual-use biotechnology, there is often a fine line between civilian and military applications.

The simultaneous need for mutual DPRK-Iran cooperation in civilian and defense sectors may also present the opportunity for each country to focus on specific areas of expertise in civilian and military technology and then share them with each other. In stark contrast to North Korea, Iran has ample funds and an advanced, diverse economy. Thus, Iran may decide to share information to help develop North Korea’s civilian programs in exchange for North Korean military technology. As I will explore in Part II, Iran and North Korea also share mutual security concerns that they can attempt to address in the science and technology sharing agreement. Beyond continued mutually beneficial cooperation in their nuclear and missile programs, Iran and North Korea also seek to address challenges such as cyber warfare, sabotage and UAVs.