Beijing’s role as a regional and international channel for inter-Korean relations has its benefits, and highlights the PRC’s centrality and prestige.  At other times, however, that same centrality is a quagmire, as with the refugee issue.  How does the CCP regard the refugees, and how has the relevant policy shifted, if at all?  What role is played by think-tank intellectuals, as well as online discourse, in the public airing of the refugee policy? Megha Rajagopalan, SinoNK.com’s Public Security Analyst in Beijing, is armed with a more than a few interesting documents in pursuit of those questions. –Adam Cathcart, Editor-in-Chief

China has yet to make an official statement regarding the recent capture of 33 North Korean border crossers, nine of whom were forcibly repatriated last weekend, sparking international media attention and a wave of protests in Seoul.

In informal discussions, informants from government and academia have conceded to American diplomats that they were troubled by the humanitarian ramifications of deporting North Korean defectors who almost certainly face execution upon their return, but they acknowledged multiple strategic considerations behind this long-standing policy, including a fear of becoming inundated with refugees or inundating South Korea, a perception that defectors are likely to commit crimes, and most importantly, a concern over losing valuable leverage with the DPRK.

The US Consulate in Shenyang, PRC.

Two 2008 diplomatic cables from the U.S. consulate in Shenyang, accessed via Wikileaks, help shed some light on Chinese thought on the repatriation issue. The first highlights a broad consensus among North Korea specialists in China that the Chinese repatriation policy is a necessary evil. Chinese academics— who are freer with opinions and information on the refugee issue than policymakers— expressed grudging acceptance of political realities despite concern from a humanitarian perspective.

Government specialists on North Korean border- crosser issues and decisionmakers alike remain in favor of repatriation. Zhou [Weiping, from Jilin Academy of Social Sciences] argued that mitigating some of the humanitarian downside is the fact that some officials/police along the border do not actively seek to arrest/repatriate–indeed, they benignly neglect–North Koreans illegally in the PRC. So too does the assistance offered to border-crossers by many borderland Chinese, often because of historical kinship ties. She added that over one-half of Yanbian’s ethnic Koreans have family connections in either North or South Korea. (C)

It’s unclear what prompted officials to detain the defectors in this case, but part of the explanation could lie with provincial governments in the northeast, who have significant latitude in deciding how strictly to enforce central government policy on detaining and repatriating defectors. A private sector analyst who works on Korea issues told me the Jilin government is in the process of replacing several officials, including the province’s deputy propaganda chief. However, Zhou suggested in the same cable that provincial policymakers actually have very little power:

Questioned about the views of provincial policymakers, Zhou replied that in her experience, provincial leaders do not generally question current policy toward North Korean border-crossers, in part because they have no decision-making authority on the issue, even at the local level. Authority remains the province of Beijing and the People’s Liberation Army/People’s Armed Police. Zhou claimed central leaders remain interested in the issue and, like provincial leaders, receive reports from the Liaoning and Jilin social-science academies, along with those from other national institutions. ¶7. (C) (NOTE: Zhou’s comments generally track with remarks we heard from other northeastern Chinese government specialists engaged in research border-crossing.

Zhou was part of a small clique of senior specialists based in Northeast China working together on classified internal research on North Korean border-crossers. According to the cables, much of their research is based on surveys of defectors in Dandong and Yanbian as well as difficult-to-obtain interviews with P.R.C. border authorities and North Koreans detained at a detention center in Dandong. Though think tanks like the Jilin Academy of Social Sciences are strictly controlled by the central government, their scholars have more leeway than government workers to speak on policy matters— even on highly sensitive issues like North Korean refugees. However, it’s unclear what consequences have befallen informants who were outed by Wikileaks, whose documents are banned in Chinese media.

In the same cable, Zhou noted that in 2002, Chinese government officials batted around the idea of loosening restrictions on refugees, which they worried would flood South Korea with new arrivals– though it’s unclear if that idea ever gained real traction.

The “Hassle” of Repatriation |  Do Security Organizations Cooperate? Another cable, dated Aug 20, 2008, clarifies the administrative process of repatriation on the Chinese side. Wu Jianhua, a scholar at the Liaoning Academy of Social Sciences, said People’s Liberation Army patrols have the power to detain border crossers, but not to take their cases further— that responsibility falls to a paramilitary force known as the People’s Armed Police Border Defense Corps, which is separate from the PLA and usually responsible for civilian policing. After that, Border Defense notifies counterparts at the Foreign Affairs Office and Public Security, and they work with North Koreans to arrange for a repatriation while “investigating” the defector. Wu said the whole process takes about two weeks— an administrative “hassle” that encourages authorities to repatriate defectors in groups.

In the same cable, Wu, who studied in Pyongyang and is one of China’s foremost authorities on North Korean border-crossers, cites a turning point in government officials’ policy toward defectors.

Wu explained that until 2002, Beijing and local northeastern Chinese government officials benignly neglected North Koreans “living peacefully” in northeast China.  But in 2002, PRC policy toward North Korean border- crossers officially shifted, requiring the arrest and repatriation of “illegal migrants” to the DPRK.  The well- known, high-profile incursions into diplomatic facilities in 2002 was only one catalyst, according to Wu.

State Media Responses | A few articles surfaced in Chinese state media last week in response to South Korean protests outside the Chinese embassy in Seoul. “Are Illegal border crossers from North Korea to China actually political asylum seekers, or are they poverty-stricken and seeking out a better livelihood?” a long article in Huanqiu Shibao asks (in Chinese here<). “The situation is complex. One can’t simply think that China’s repatriation of illegal aliens is trampling on human rights.” Stephan Haggard noted in a blog last Monday that a story in Chinese press, for which he was interviewed, was suddenly pulled “as a result of warnings that the press should be “careful” about all North Korean coverage.”

On Friday, an opinion piece in People’s Daily headlined “Be sure not to trouble the Korean peninsula’s smooth, stable progress.” The article, which appeared in the international edition of the CCP’s primary mouthpiece, argued that South Korea’s complaints on the refugee issue were harming regional stability. “Attempting to refugee-ize （难民化）, internationalize or politicize this problem [the refugee issue] would be futile. China’s actions completely comply with the interests of concerned parties and international norms,” it reads. “If not for China’s positive constructive role, it’s difficult to imagine that the Korean peninsula’s situation would be as balanced as it is today.”  As Austin Ramzy pointed out in TIME, the article was written under the penname 钟声 zhongsheng, which literally means “a bell’s toll” but is a homonym for the phrase “China’s voice,” which suggests that its viewpoint could stand for official policy.

Chinese media refers to the defectors as 脱北者 tuobeizhe, literally, “leavers of the North” as opposed to a more politically charged term like 难民 nanmin, meaning refugee. (The People’s Daily article even avoided that term, simply referring to the defectors as “illegal aliens.”)

Netizen Responses |  Despite the carefully controlled coverage, chatter from Chinese netizens appeared largely sympathetic to the defectors. “I’m filled with admiration for the courage and intelligence of the tuobeizhe… I sincerely hope that authorities can keep one eye open and one eye closed,” one Sina Weibo user posted, using an idiom that means ‘look the other way.'” Others linked old news articles pointing out that China had signed onto the UN refugee convention. “The North Korean tuobeizhe completely fit the UN’s definition of refugees,” another microblogger wrote. Many said they worried the refugees would be killed upon repatriation.

Even comments on that piece in Huanqiu Shibao didn’t seem sold on its viewpoint. “It appears as though those who are sent back will be persecuted severely. How about a little compassion?” one ventured. Another, voted the most popular in the comment thread, simply said, “Inhumane.”

However strongly ordinary Chinese citizens may feel about the issue, it seems unlikely that domestic or international pressure will change official policy on deportation of defectors. Despite fluctuations in the strictness of enforcement, central government policy seems to have remained constant despite an expanding flow of border-crossers. From the Chinese government perspective, the policy’s upside—holding onto political capital in DPRK relations— far outweighs the downside of condemning innocent North Koreans to imprisonment or death. In the short run at least, a return to “benign neglect” may be the best we can hope for. 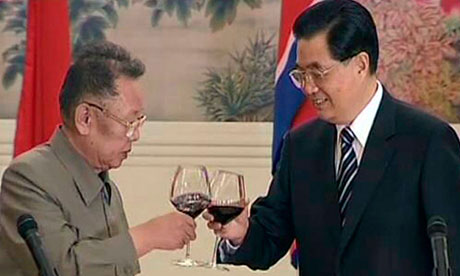 Beijing’s political and economic interests in North Korea appear to outweigh its commitment to humanitarian relief. Image via The Guardian